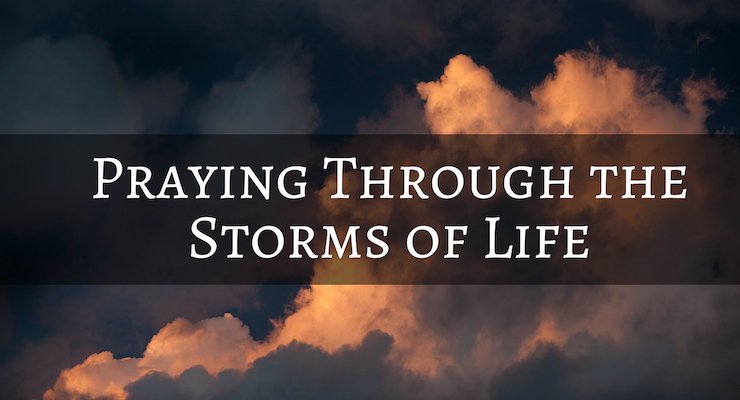 Today’s post is a guest post from Pastor Jim Buckman. Pastor Buckman serves as an urban missionary in New Jersey and is the author of iPray. His latest project is ahouseofprayer.net – an online web app to help you find a church to pray with you. You can also download the iPrayU app on your iPhone or Android.

On that day, when evening had come, he said to them, “Let us go across to the other side.” And leaving the crowd, they took him with them in the boat, just as he was. And other boats were with him. And a great windstorm arose, and the waves were breaking into the boat,so that the boat was already filling. But he was in the stern, asleep on the cushion. And they woke him and said to him, “Teacher, do you not care that we are perishing?”And he awoke and rebuked the wind and said to the sea, “Peace! Be still!” And the wind ceased, and there was a great calm.  (Mark 4:35-39)

Jesus is God in human form- Jesus knows all things; Jesus knew that storm was coming. Jesus was not surprised when that first raindrop hit His head. Yet, knowing the storm that was coming; Jesus told his boys to get in the boat anyway. And then, Jesus went to sleep. Not pretend sleep; He was sleeping soundly. So when the 12 disciples find themselves in a storm; why are they there?  Because Jesus told them to be there! All the disciples were doing is what Jesus told them to do.

Recently, I was on my way to Salina, KS to train 37 pastors and lay leaders in prayer and planting house churches. My itinerary took me through O’Hare airport. I was on a tight schedule, after landing in Wichita, I had a three hour drive to get to the installation of a newly elected church official, after which I had another three hour drive to get to Salina, KS where the following morning I would start my first of five training sessions at 8am.

My flight to Wichita was cancelled at the very last minute which meant I had to go clear around the airport to a different desk and get my flight rescheduled. When I got to the desk, I was greeted by Rosie, an airline employee. Rosie worked with me to get me on a new flight and rechecked my bag; only to have this flight also cancel. Rosie continued to work with me for an hour until my flight was finally set up.

When Rosie finished, I thanked her and asked, “Is there anything I can pray for you about?”  Rosie replied, “Yes, my medical condition.”  I assured Rosie that I would say a prayer for her later that night. I then started to make my way to the terminal I would fly from. As I was walking along, I saw Dennis Rodman the former Chicago Bulls player. But that is another story…

As I continued to walk along, I felt the presence of someone following me. Turning around I saw that it was Rosie, the airline employee. Surprised, I said, “Hi.” Rosie reached her hand out to me and said, “I just wanted to thank you for offering to pray for me.” I replied, “No problem, I’m happy to do it.” Rosie, then stuck her hand out again and said, “Thank you for praying for me, it means so much.” Surprised, I said, “It’s no problem.” Rosie repeated herself two more times and then the light finally came on in my head (I’m a guy, it takes a while)- there was something more going on.

So, I said to Rosie, “I have time before my flight leaves. Why don’t we sit down on one of these benches, you can tell me more and I can pray with you?”  Rosie agreed, so we sat down and Rosie began to tell me about her medical condition. I asked Rosie how long she had suffered and Rosie replied, “Two years.” I asked Rosie, “Did anything significant happen in your life two years ago?”  Rosie got very choked up and said, “Yes, my son was killed in a drive by shooting.” Rosie then went on to share about the last two years and the legal hurdles of the prosecution process. Rosie reached in her purse, got out a pin with her son’s picture and name on it and then she asked me, “How could God let this happen? Why did this happen to me?” Rosie went on to tell me that she has not been back to church since that day; but that she still reads her Bible and prays and believes.

As I listened to Rosie, I shared with her from God’s word and assured her of God’s grace towards her in the midst of all this. I asked Rosie if I could pray with her and she agreed. After we prayed, I said to Rosie, “I am on my way to Kansas; then I will be returning to New Jersey. I will not be in Chicago. Would it be ok with you if I shared your prayer request with a local church that would love to pray for you and care for you?”  Rosie agreed so I got out my smart phone and showed her “iPrayU”- the prayer app and explained how this is a simple way for Christians to put prayers for others into the prayer ministry of a local church. Rosie’s eyes got so big and she smiled for the first time. I opened up “iPrayU” and asked Rosie for her last name, address and phone number so that the local church could follow up; which she gave me.  When I clicked “submit” a message came up notifying us that her prayer request had been successfully submitted. This brought another smile to Rosie’s face. I explained that this meant the pastor and prayer ministry coordinator had both been automatically emailed with her prayer request and that their church’s prayer database had been automatically updated. Rosie thanked me and said, “I’m looking forward to the church contacting me.”

That night as I was flying to Kansas, I thought about what had happened. In the moment, as I was going through the cancelled flights, all I could see was my storm and how little sleep I would get and that I would miss the installation of this church official. But later, as I was reflecting it became obvious to me that what God had on His schedule for me was different than what I had. See, God had His daughter Rosie on my schedule- Rosie hadn’t been going through a storm for just an afternoon on the lake or a night at the airport; Rosie had been going through her storm for two years.

Prayer is a blessing from God for us, when we are in storms. It is also a blessing for us when others are in storms.  I want to ask you for something very valuable- your time. Make time in your schedule today, for God’s schedule. Look for that person who is in a storm and just ask them this simple question, “How can I pray with you?”

Maybe you are thinking of someone right now who has always tried to do what God wants them to, just like those disciples, but they find themselves in the middle of storm wondering where God is.  Take a minute, say a prayer for them. Talk with your friends and agree on how you can bless them.