Today we remember Jesus sacrifice on the cross. It is a somber day. We remember the pain, the grief, the suffering, the darkness, and the loneliness. As Jesus hung on the cross at that moment, he bore the weight of the sin of the world. Listen to these words from the prophet Isaiah, written 700 years before Jesus:

“But he was pierced for our transgressions; he was crushed for our iniquities; upon him was the chastisement that brought us peace, and with his wounds we are healed.” (Isaiah 53:5, ESV)

He bore the weight. He was crushed for our iniquities. When you visit Rockefeller Center across 5th Ave from St. Patricks Cathedral in the New York City, you may see the sculpture of Atlas holding up the world with all of his strength. His knees are buckling. His arms are trembling. There is blood running down his chest. The last of his energy is spent on this impossible task. While this is a myth, Atlas holding up the world, it resembles what happens on the cross.

But Jesus does not bear our sin because he had to. He chooses to do so. He willingly takes this weight upon himself. He is willingly crushed. He does so out of love. Jesus does not suffer because he was condemned by Pontius Pilate and the religious leaders. It was not the nails that held him to the cross. There is no one who held power and authority like Jesus held. He could have commanded 10,000 angels to come to his rescue if he chose that. It was love alone that held him to the cross.

Those looking on mocked him:

“He saved others; he cannot save himself. He is the King of Israel; let him come down now from the cross, and we will believe in him.” (Matthew 27:42, ESV)

Little did they know, he could have saved himself. Yet, he chose to die so that they might live. Jesus chose forgiveness and love rather than condemnation and vengeance.

As God, Jesus is the only one who was able to take such a burden. It was Jesus alone. That moment on the cross was the loneliness moment ever in the history of all creation. There was

“He was despised and rejected by men, a man of sorrows and acquainted with grief; and as one from whom men hide their faces he was despised, and we esteemed him not.” (Isaiah 53:3, ESV)

There is no other way to say it – Jesus endured hell! He went through the fire. People sometimes joke about hell being a party with their friends. Nothing could be further from the truth. The pain of hell is not fire. It is something far worse. It is the pain of despairing loneliness. But Jesus endured such loneliness to save us from it.

This is a day we are often somber and sad. We remember what Jesus did. We reflect the fact that the reason he did what he did was because of our sin. We recognize we are as responsible for Jesus death as much as Pontius Pilate, the religious leaders, and the Roman soldiers. We realize that we are no different than his closest followers who abandoned him in this most crucial moment.

Our sadness is mortality. It is our sin. It is our lack of faithfulness. Our sorrow is how we have taken for granted his amazing love and sacrifice. We are humbled on this day that we would have the audacity to demand anything of a God who gave all.

There is a reason that Good Friday is called good. It is because of Easter Sunday. Without Sunday there is nothing good about Friday. If Jesus had simply been crushed by sin, then all hope would be lost. We would be left with nothing but grief and sorrow.

I have one final thing to say at the end of this lengthy post: Remember that the same spirit that raised Jesus from the dead is at work in you. This is why Paul says:

“But we have this treasure in jars of clay, to show that the surpassing power belongs to God and not to us. We are afflicted in every way, but not crushed; perplexed, but not driven to despair; persecuted, but not forsaken; struck down, but not destroyed; always carrying in the body the death of Jesus, so that the life of Jesus may also be manifested in our bodies. For we who live are always being given over to death for Jesus’ sake, so that the life of Jesus also may be manifested in our mortal flesh.” (2 Corinthians 4:7–11, ESV)

We may feel the weight of the world pressing down on us. We may suffer evil. We may be confronted with the consequences of our sin. We may be broken and beat down. We may feel lonely. We may be crushed.

But the cross remains… It is our symbol of hope.

There is a good chance you have seen this pic: 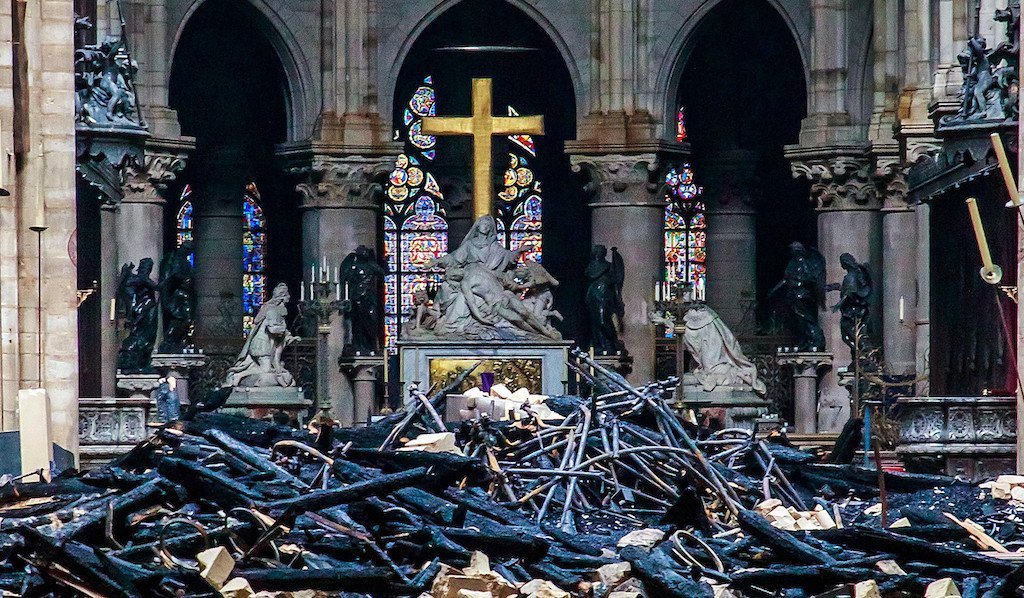 It has made its way around the internet. It is a picture in the aftermath of the devastating fire at Notre Dame. There is incredible destruction here, but still, the cross still shines. The cross still stands.

Our hope, though heaven and earth may pass away, Jesus has won the victory. Whatever devastation you may experience, if you have the cross of Christ, you can know that you will still stand. You can have everything taken from you, but Christ has secured your salvation.