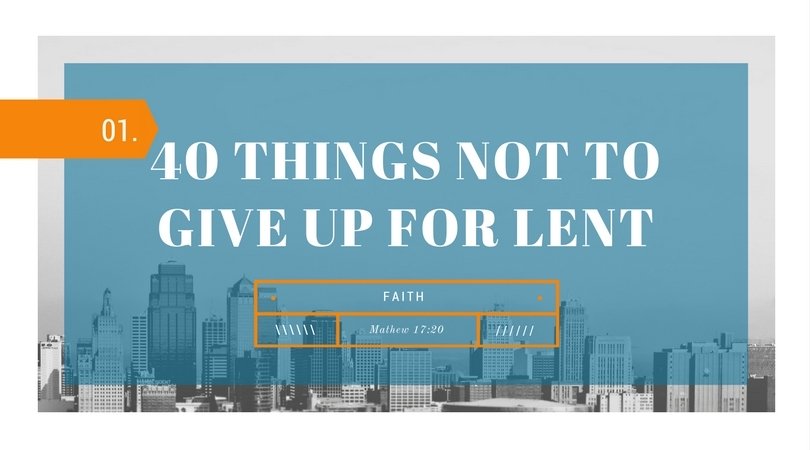 In 1 Corinthians 13:13, we read that there are three that remain. These are faith, hope, and love. 1 Corinthians 13 is known as the great Bible chapter on love. There is hardly a wedding I officiate where this chapter is not read. While the chapter is all about love, the Apostle Paul says that faith and hope also remain.

As we talk about 40 Things NOT to Give up for Lent, it would appear that these three (faith, hope, and love) are ideal candidates to top of the list. During this first half week of Lent, we will take a deeper look at these three. We will start off with faith.

“He said to them, “Because of your little faith. For truly, I say to you, if you have faith like a grain of mustard seed, you will say to this mountain, ‘Move from here to there,’ and it will move, and nothing will be impossible for you.”” (Matthew 17:20, ESV)

“Jump! You can do it! Daddy will catch you!” I tried to convince my son to jump into the pool. But fear had seized him. He would not do it.

I negotiated some more. I told him I would not let him sink. I talked about the fun he would have. He just needed a little faith.

Then that daring moment came. He screamed. He jumped. He made a splash. I caught him. It was scary. It was thrilling. It was exhilarating.

Almost as soon as he jumped into the water, he was back out of the pool ready to jump in again. All it took was a little faith, and he was hooked.

Jesus says, ‘with a little faith you can move the mountains.’ It might seem impossible to move a mountain. There may be many things holding you back from moving a mountain, but at the top of the list is lack of faith. Without faith it is impossible.

Faith makes possible the impossible. It opens the door to possibility. It was impossible for my son to jump into the pool without faith. As soon as he mustered the faith, it became possible. And he did it! The truth is that you can accomplish so much more when you believe.

Leap Beyond Knowledge and Belief

Faith has an Object

It was not blind optimism that eventually led my son to take the leap. He jumped because he had faith in his dad. His faith had an object. And Jesus desires to be the object of your faith.

Are you ready to jump? Do you believe God will catch you? Faith may seem like a dangerous business. But when you finally jump, you will wonder what you were waiting for. I believe God is inviting you to jump today. What are you waiting for? You can do it. Jump!