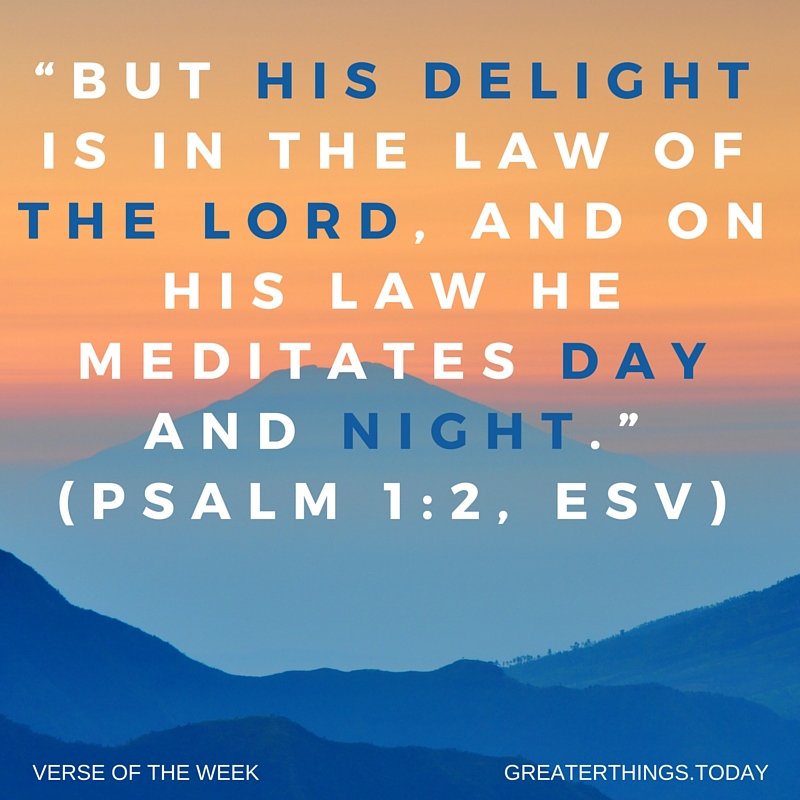 “but his delight is in the law of the LORD, and on his law he meditates day and night.” (Psalm 1:2, ESV)

Meditation is a natural part of life. For example – worry is mediation. It is churning negative thoughts over and over in our mind. The question is not so much if we meditate. It is more about what we meditate upon.

In Psalm 1:2 we are directed to meditate on Word. It is God’s Word that guides and directs us in life. God’s Word lays out a path to experience fulfillment. It gives us truth when we are surrounded by the lies of our culture.

That’s why I put out the memorization challenge. We memorize God’s Word so that we can call upon it at any moment. In other words, we can meditate upon it. It is hard to meditate on something we are unfamiliar with. 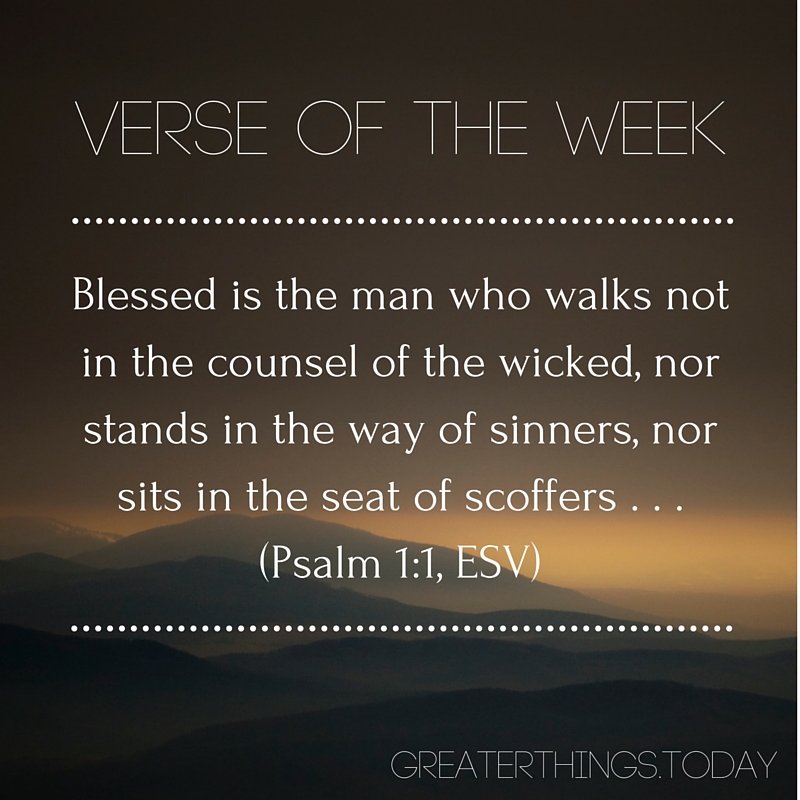 Blessed is the man who walks not in the counsel of the wicked, nor stands in the way of sinners, nor sits in the seat of scoffers . . . (Psalm 1:1, ESV)

Every week at Greater Things Today we feature a verse of the week. This started when I wrote about taking the Memorization Challenge. The idea is to memorize one verse a week. After the course of the year, you will have memorized 52 verses of Scripture. It doesn’t take much effort. But the impact is incredible.

The past few weeks we spent time memorizing the Beatitudes from Sermon on the Mount. This week we turn our attention to the very first Psalm. It is a short Psalm. It will take us a month and a half to memorize it as we take one verse a week.

Psalm 1 serves as an introduction to the book of Psalms. It informs the reader what they will experience in the chapters which follow. The Psalms are filled with many verses worthy of memorizing. There are many modern songs and hymns that are based on the Psalms. There is a reason for that.

The Psalms was a song book. It would have been the hymnal of Jesus time. Many of the Psalms were written by David who was a warrior, a king, a shepherd, and a musician. The Psalms are powerful prayers written from the depths of his soul which are born out of his diverse experiences in life. 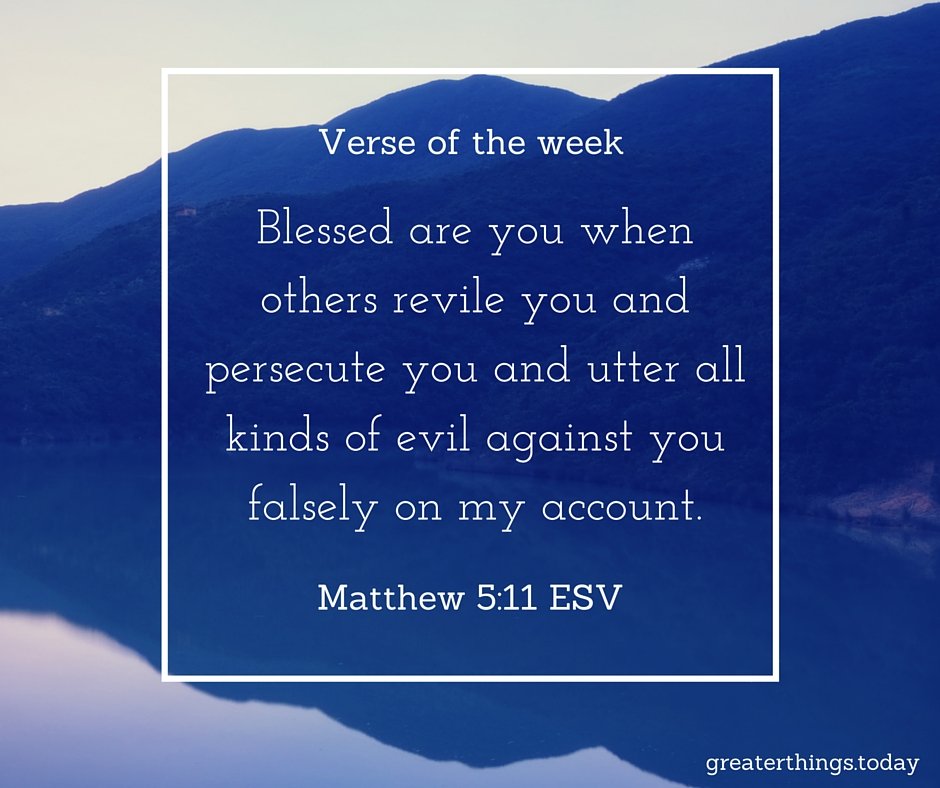 “Blessed are you when others revile you and persecute you and utter all kinds of evil against you falsely on my account.” (Matthew 5:11, ESV)

We have come to the last verse of the Beatitudes of the Sermon on the Mount. Here Jesus continues the thought from last week’s verse. You are blessed when you suffer for the sake of Christ. The Apostle Peter shares this sentiment in 1 Peter 3:14-17.

“But even if you should suffer for righteousness’ sake, you will be blessed. Have no fear of them, nor be troubled, but in your hearts honor Christ the Lord as holy, always being prepared to make a defense to anyone who asks you for a reason for the hope that is in you; yet do it with gentleness and respect, having a good conscience, so that, when you are slandered, those who revile your good behavior in Christ may be put to shame. For it is better to suffer for doing good, if that should be God’s will, than for doing evil.” (1 Peter 3:14–17, ESV)

There is suffering in this world. We will all suffer at one time or another. But let’s make sure we are suffering for the right reasons.

Next week we will continue our memorization challenge by looking at Psalm 1. 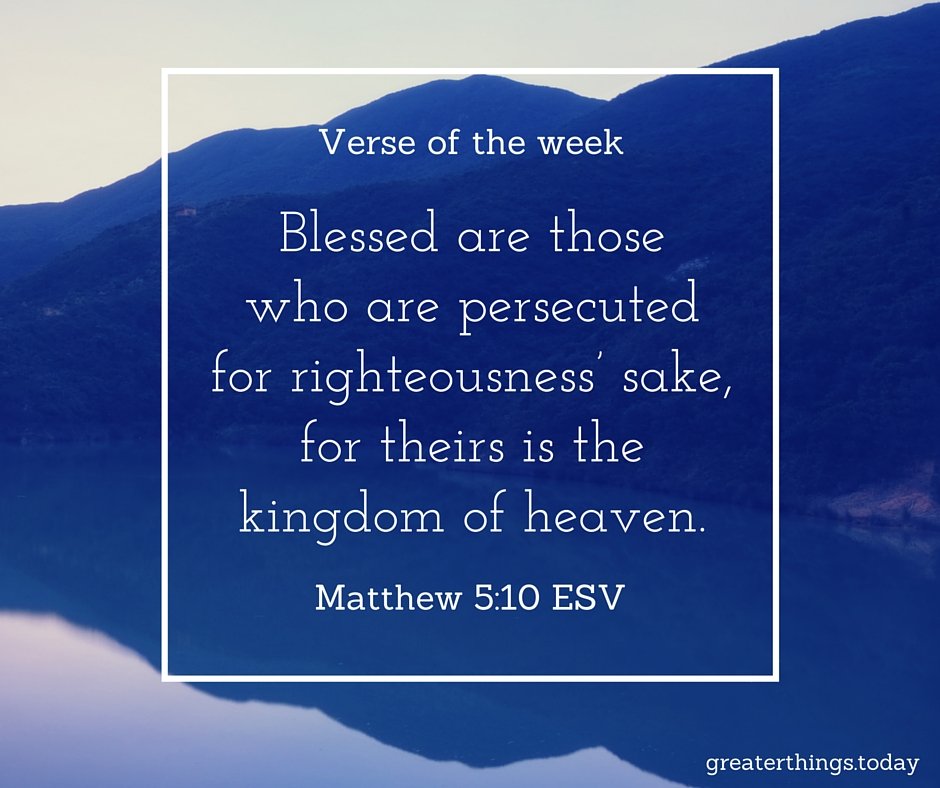 Blessed are those who are persecuted for righteousness’ sake, for theirs is the kingdom of heaven. (Matthew 5:10, ESV)

Join us in our memory verse challenge. Memorize one verse a week. 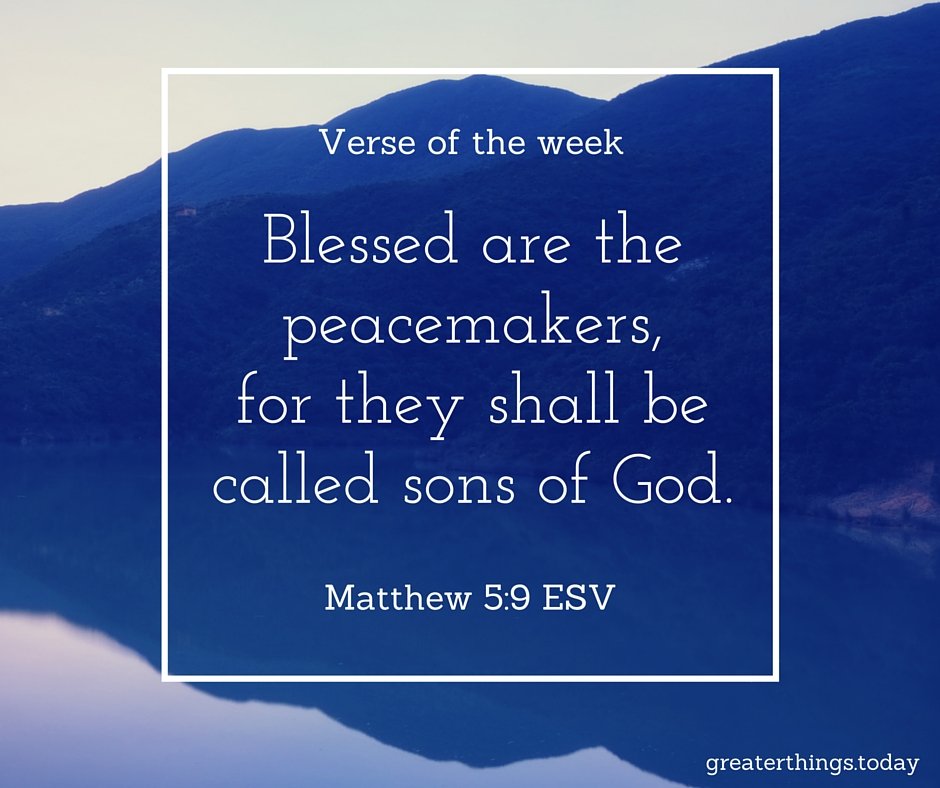 Our verse of the week is from the Beatitudes at the beginning of the Sermon on the Mount:

Blessed are the peacemakers, for they shall be called sons of God.” (Matthew 5:9, ESV)

Some people constantly seek to cause division. They are critical of others. They intentionally and unintentionally create a divide in families, churches, and other organizations. They push buttons to get a rise out of others. It is almost as if they enjoy the drama they create. They are called the peace-takers. We all know people like this. If we are honest with ourselves, we will recognize some of these characteristics in ourselves.

But it is the peacemakers whom Jesus says are blessed. They are the ones called the sons of God.

Today is Palm Sunday. We celebrate Jesus as he enters Jerusalem to conquer death. But when he enters the city he rides on a donkey rather than a horse or chariot. You would have expected the King to ride on a horse. The horse was an animal of war. Many thought Jesus was about to begin a revolution. They were right. But it was not the revolution they expected.

Jesus rides the donkey. It is an animal of peace. It the animal you would expect to see ridden by a man of peace such as a farmer, a priest, or a merchant. The revolution Jesus came to begin was of an entirely different category than anyone could imagine. He was about to usher in an era of peace between God and humanity. Many in the crowd thought Jesus would overthrow the Gentiles. But the one Jesus was to conquer was Satan.

Being a peacemaker does not mean you will never fight any battles. Being a peacemaker is knowing which battles to fight. Jesus knew the battle people wanted him to fight was not the battle he needed to fight. He wasn’t concerned about living up to the expectations of others. What mattered most was the will of his Father.

Now Jesus says the peacemakers will be called sons of God. Peacemakers are the ones after God’s own heart. God is all about peace. Jesus is called the Prince of Peace. Becoming a peacemaker starts with following Jesus. It is desiring what God wants more than anything else.

So the question that needs to be asked is what are you willing to give for the cause of peace?